Dinosaurs before Adam and Eve? 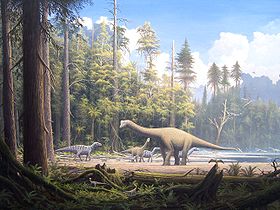 Pre-Adamic creation of dinosaurs was on a much bigger scale

Lots of people see dinosaur bones, in local museums, like the Queensland Museum, in Brisbane and national museums like the National Dinosaur Museum, Canberra, Australia.

But how many understand why the dinosaurs existed, were suddenly wiped out, and pressed into fossils and ‘fossil fuels’, like oil, coal, and natural gas?

Were dinosaurs part of the evolutionary process or did they live on the earth prior to Adam and Eve being created?

Dinosaurs existed in the creation, prior to the different Adamic creation.

What does the Bible say about dinosaurs and God’s pre-creation before the Adamic creation? Where do dinosaurs fit in biblical history? Is the Earth older than 6000yrs?

Yes, it sure is! …and the pre-Adamic reptilian dinosaur creation was on a vastly bigger scale, with the trees and vegetation as well as the dinosaurs …than the mammalian Adamic creation that followed, which was on a smaller proportionate scale more suited to mankind.

Does the fossil record really support evolution or reinforce creation by God?

The fossil record does not show any intermediate species, but rather shows intricately designed completely functioning creatures.

Why is there such a sudden shift in the fossil records from Reptiles to Mammals?

As the famous palaeontologist G.G. Simpson once remarked: “The most puzzling event in the history of life on the earth is the change from the Mesozoic Age of Reptiles, to the … Age of Mammals. It is as if the curtain were rung down suddenly on a stage where all the leading roles were taken by reptiles, especially dinosaurs, in great numbers and bewildering variety, and rose again immediately to reveal the same setting but an entirely new cast, a cast in which the dinosaurs do not appear at all, other reptiles are supernumeraries and the leading parts are all played by mammals of sorts barely hinted at in the previous acts” (Life Before Man, 1972, p. 42)

Genesis 1:1 describes God’s originally perfect creation of the heavens (universe) and the earth.

Genesis 1:2 begins the description of God’s formation of man’s world. However, between Genesis 1:1 and Genesis 1:2 is a time lapse. A critical time lapse of unknown duration of aeons of time.

In Genesis 1:2 the Earth appears chaotic, having suffered destruction and confusion. The Hebrew words for “without form and void” are tohu and bohu. The Earth and other portions of the Universe had become damaged and in ruin. Water covered the entire Earth, so it was already here, when God began His new creation …not with reptiles primarily, but with the predominance of mammals.

No sunlight pierced through the thick, poisonous atmosphere. The Earth lay in darkness and ruin. It was the product of a great catastrophe – resulting from the rebellion of Lucifer and one third of the angels who had turned renegade against God.

For more information, check out the articles on this subject starting with: Where do the dinosaurs fit? Good News, May-June 2008.

Also read the sidebar “Earth’s Age: Does the Bible Indicate a Time Interval Between the First and Second Verses of Genesis?” in the FREE booklet Is the Bible True?

PS:  You can obtain FREE copies of this literature and the FREE Good News Magazine by contacting the United Church of God-Australia, Office on FREE CALL 1800 356202 or write to: PO Box 535, Brisbane, Qld 4001 OR as shown under Literature Request  on the Church webpage  …OR you can FREE download by clicking on to:  Bible Study Course AND Is the Bible True AND Creation or Evolution AND Is there really a Devil?

PPS: “Why not have Your say?”  Feel free to click onto these next 4 words and drop me an email.

This entry was posted on Saturday, May 2nd, 2009 at 1:18 pm and is filed under Australia, breaking news, evolution creation, God, latest news, Uncategorized. You can follow any responses to this entry through the RSS 2.0 feed. You can leave a response, or trackback from your own site.

One Response to Dinosaurs before Adam and Eve?